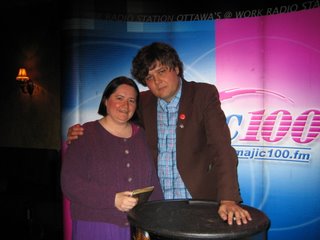 Last evening at the beautiful Velvet Room in the Byward Market, Ron Sexsmith played six songs from his new CD, Time Being. The venue itself is a lovely and intimate setting. It's just above Fat Tuesdays (formerly Stoney Mondays!) on York Street, and like many of Ottawa's Byward Market buildings, it's made of stone. The light shone through purple gauzy curtains, adding a soft and intimate tone to the setting.

While waiting, we were treated to drinks and hors d'oeuvres. My husband and I got a chance to chat with fellow ardent fan Ian, and his wife Sue. I also recognized a few of the folks from Ottawa's media and music biz, which was good because this was what is referred to as an industry showcase. I recognized Alan Neale of the CBC and Chris White of the Ottawa Folk Festival among others, but I wasn't really paying much attention because I was too excited about the upcoming performance.

Ron came out from the back of the room and announced he would play the songs the way he first played them in his bedroom. I am very glad I had a seat near the stage. I got to see up close just how skilled his guitar playing is. Last night in particular I developed a new appreciation for "Jazz At The Bookstore," and "Reason For Our Love."

With Ron's music, the blend of his voice and the instrument, whether it be acoustic or electric guitar, or piano, and the way he has arranged the piece are key to understanding the song. He will often allow the instrument to say things that he himself doesn't say in words.

For an example of this, go back to his CD "Whereabouts" and listen to the song "Right About Now" after the lyrics "think I'll just let my heart speak." On the CD, there's music after that. When you hear him live, that's his guitar alone. For "Time Being," I've noticed this quality in many of his songs during the recent webcast and at last night's show.

I had the pleasure of chatting briefly with Ron after the performance (hence the photo taken by someone from Majic 100 I think?). He is always such a pleasure to talk to. I've been attending his shows regularly since just after "Other Songs" in the mid 90s, probably at least a decade if not a bit more andhe's always been so friendly and happy to see his fans. This venue was perhaps the smallest and most intimate place I've heard him play.

As usual, the music was beautiful and Ron's voice and guitar playing touched me deeply. "Never Give Up" has already become one of my favourites on the CD and makes me feel a tad weepy.

Ron's music is about being alive, living through difficult times and getting through, celebrating life. I'm so pleased to see him achieving the success he so rightly deserves. I look forward to his concert at the Ottawa Folk Festival in August. Thanks to Cathy Hendrix of his management for giving me tickets. I'm still glowing :)

Jazz At The Bookstore
Never Give Up
I think we're lost
Reason For Our Love
Snow Angel
Hands Of Time
Posted by Amanda Earl at 7:32 AM

I'm a big Ron Sexsmith fan. I last saw him in Liverpool UK (Where I live) Oct 2004. I hung around and got to meet him. Great guy. I enjoyed your post.