read last night at the Carleton Tavern. Nick leaves town next week for New Brunswick and rob is off to Edmonton for his 8-month writer-in-residence position at the University of Alberta in the fall. Seems like a good occasion to hold a reading. Marcus is not (had better not!) leaving.

The Carleton Tavern is such a great venue for a reading: there are two rooms upstairs, a bar and a server available (thank you the very patient Aline). The rooftop serves for post reading stargazing and smoke breaks or wild spinny dances (rob and Carmel).

Last night we had a full house of friends and well wishers. Monty Reid hosted the reading. First we had a mic and stand, then we didn’t. Ah sweet mystery of life.

Marcus McCann began the reading with some of his slant phonetic translations and a very fun poem about saxophones. What always impresses me about Marcus’ poems is the way he plays with sound. A series called Tectonic Suite referred to technology, the tonic note in music and other sideways shifts from the tectonic.

Next up was Nicholas Lea who read from his recently released first poetry collection Everything is Movies (Chaudiere Books, 2007) and also from a series of new poems. One piece was a tongue in cheek poem railing against the lack of publication opportunities for those who, as Nick says, write poetry that doesn’t make sense. His writing always moves me. There’s a stillness to it and the juxtaposition of unlike ideas and images is unique and provocative. I will be very sad to see him go. I look forward to the inspiration Fredericton will provide though.

After a break, the reading resumed with rob mclennan, who read from the Ottawa City Book Project (Chaudiere Books, 2007) , a series of love poems about a (now) imagined future and “After Spicer” (Apostrophe Press, 2007), draft poems inspired by Jack Spicer and others including Robin Blaser.

i can’t do After Spicer justice really, but i’ll extract some of the little gems and you can get a copy from rob yourself.

“thirteen ways/of pitching past an orange”

“; notions of a poet/ or of an oranger, sweeter//in the glove”

What I most love about mclennan’s poems is that he makes me feel like anything is possible in a poem. I think his poems have gotten more lyrical over the years. He’s still pushing the boundaries of language and playing with subtle meaning and form in his writing, but on the lyricism and imagery are more prevalent. Although .... i picked up a copy of an older book I didn’t have (harvest: a book of signifiers (Talonbooks, 2001) and I can see the lyricism there too.

there is blue among them trees, there is snow
slipping quiet from the sundrencht roof.
hope it don’t rain tonight, anyway.

(from the series, “it doesn’t matter”)

I will miss rob.
Posted by Amanda Earl at 1:18 PM No comments:

http://web.ncf.ca/helios/muses/
Posted by Amanda Earl at 7:08 AM No comments:

i have a new obsession

and his name is Joel Thomas Hynes. his novel Right Away Monday,. about a sometime bartender who lives a lost weekend kind of life, boozing and fucking, is phenomenal.

he’s got one of those sexy Newfoundland accents i can never resist. his first book is Down to the Dirt and it’s being made into a film for CBC. Hynes is taking on the main role. yay!

here’s the start of Right Away Monday...tell me it doesn’t speak to you and make you want to devour (the book, um...yeah, the book).

“I says look here girl, I says. I’ll fuckin eat you alive I will.

And she blushes at that, goes right scarlet she do. Of course. Cause I’m far stunned. I knows how to smile when I wants me skin. It’s all in the smile. I was crossin on the other side of Water Street when that gangly Philip fucker bawls out and waves me over. Skull-and-crossbones on the front of his girls-size tee-shirt. That pisses me off, cause you gotta earn the privilege to wear that particular badge and you can tell at a glance that he’s nowhere near worthy”

here’s someone i’d love to see at the Ottawa International Writers Festival, wouldn’t you? try to keep me out of the hospitality sweet (yes, pun intended) if this one came to town ;)
Posted by Amanda Earl at 2:55 PM No comments:

steamed up the Royal Oak II last night, and it was already pretty darned steamy, with their reading as part of Tree’s second annual Hot Ottawa Voices event.

the most memorable reader for me during the open set was Nicholas Lea, who read a few new poems. i’m very much looking forward to hearing him read before he leaves Ottawa (he’s reading with fellow departing writer rob mclennan, and staying here poet Marcus McCann at the Carleton Tavern on July 28).

another noteworthy reader in the open set was Michelle Desbarats who read a poem scrawled on some very tiny note paper. i’m looking forward to reading with Michelle along with rob mclennan and Mike Buckthought on July 20 at Rasputins.

after a break for cooler air and circulation, we returned to the basement for the features. more fans of the features arrived, making this event one of the most well attended i’ve seen at Tree in some time.

Emily Falvey opened with an excerpt from her manuscript about a love triangle, and falling in love with the French language. i am a big fan of Emily’s writing. her observations about human nature are witty and spot on. in the excerpt one particularly memorable bit for me concerned coffee and the Greeks believing one can tell the future by reading its grounds. Emily writes with cosmopolitan flare and sophistication while still maintaining an understated tone.

Jacqueline Lawrence is someone I’ve never heard before and I really enjoyed her work. she told us her reading would be about surrender, the name of her chapbook and about being black, fat and female, making all of these into something to celebrate. along with the humour and sensuality of her poetry, Lawrence mixes honesty and incidents to arouse compassion and empathy. i enjoyed her sense of fun, particularly the poem about mango baths. my good mentor, SARK always says...eat a mango naked.

Marcus McCann continued the warming trend with amusing poems about gay threesomes, park sex and some really nerdy word game poems, that were perfect for us word geeks. his most memorable poems for me were those that turned expected things around...something like but not quite: “it wasn’t cold, the air was improvising.” it was much better than that but hard to convey. you’ll have to go to his reading on July 28 at the Carleton to hear for yourself.

Sandra Ridley finished the set with 12 ghazals from her soon-to-be-published chapbook Lift, concerning life in the 50s on a prairie town. i really enjoy Ridley’s simplicity with language and strong imagery. her poetry is quiet and effective. i wish i could give you a good example; instead i’ll send you here. this year Sandra has been reading more and more and i feel she’s really improved in her reading style because of it. she is quiet but this quiet demeanour draws the audience to her rather than pulls them away. the audience was attentive all evening, but there was something almost holy in the way we listened to Sandra. that’s the only way i know how to explain it. i am sure we’ll be hearing more from this talented writer soon.

Tree organizers made excellent choices once again this year for Hot Ottawa Voices. these writers are rising stars. and the night certainly couldn’t have been hotter...

thanks to Dean and Rhonda for organizing another excellent reading. the next one will be a Midsummer Night’s Tree on July 24. it’s the annual all open mic night and it will be hosted by rob mclennan.

don’t forget to season your summer with other upcoming readings. see the Bywords calendar for more. and for those of you still recovering from last night’s sauna, let’s all go jump in a lake!
Posted by Amanda Earl at 7:26 AM No comments: 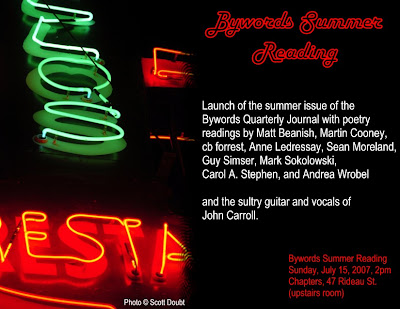