h (from the missing h poems) 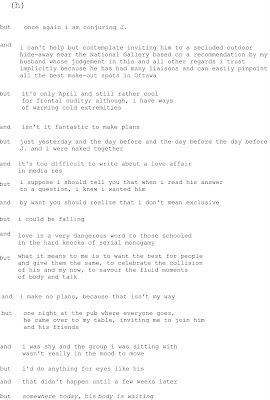 the above poem is one of several poems i’m writing as a complement to my chapbook, The Sad Phoenician’s Other Woman (above / ground press, 2008), a response/dialog with the Robert Kroetsch poem “The Sad Phoenician” published as part of “Completed Field Notes” (University of Alberta Press, 2000)

it is one of several poems from the working title: the missing h poems (because i didn’t include the letter ‘h’ in the above chapbook, which like the Kroetsch book, is structured alphabetically). another one of these h poems will be published by Vancouver’s pooka press.

words, lines, phrases in italics come from “the Sad Phoenician” .
"The Sad Phoenician's Other Woman" was an exercise for me in writing narrative and in disjunctive narrative. It was also an exercise in the life poem, in including autobiographical details, but still trying to consider how to make the work artful or a poem.
these missing h poems have a slightly different consideration and that is the notion of "in media res" ....or my own variation thereof...writing about something as it occurs and not making changes to it after the fact. since the missing h poems will be about current rather than past experiences, but by the time the pieces are read, the current will have become the past, it makes for some interesting possibilities and inspirations.
Posted by Amanda Earl at 6:00 AM