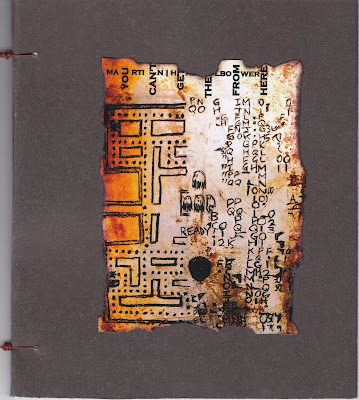 Nicholas Power, the Steady Pull of a Curious Dog with drawings by Camilla Burgess

Martin Hazelbower, You Can’t Get There From Here: twenty inventions (pictured above)

stuck two loonies in the machine and got a yellow folded work
by Pasha Malla: Bad Humanitarian Aid Organizations (huzzah!)

especially keen on Junction Books, sunnyoutsidepress & Red Iron Press, which had some fantastic stuff, but i ran outta dough.

At the AngelHousePress table, we had a $1,2,3,4, 5 sale and sold out of many chapbooks we brought with us and completely sold out of rob mclennan’s house, a (tiny) memoir and my signs of the apocalypse magazine, issue 1-A; now i can move on two the 2nd issue. we didn’t sell that many broadsides this time around, but a lot of conversation revolved around them, which is great.

The Meet the Presses Screaming Chapbook Fair was a great opportunity to mix with fellow chapbookers and witness various methods of production. It was also fun to see many of my Toronto friends again or for the first time. I also enjoyed gawking at some lovely young Torontonian men. Gosh they make them pretty over there by the lake.
Posted by Amanda Earl at 12:30 PM