VERSeFEST: sketchy notes from day one

unfortunately I was feeling wonky yesterday, a bit of a stomach upset & then sinus pain/ear ache, so I couldn't stay for the whole evening, but enjoyed the first reading with poets Paul Tyler, Suzanne Buffam & Dennis Lee. & the fabulous host, Alan Neal from CBC Radio's All in a Day. he was funny, kept things rolling, was respectful & complimentary to the features without rabbitting on or heaping on the praise to the point of idolatry.

Of note to me were

Buffam's wonderful reading. I particularly enjoyed her beautiful words for hideous things list poem [I'm sorry for paraphrasing the title.] She read mostly new work, but also a bit from the Irrationalist. It was interesting to learn that the book had been jointly published by Canarium Books, an American publisher & House of Anansi.

Lee's Melvis & Elvis poem for kids that will be in a children's book later. His reading from Testament (House of Anansi Press, March 2012 [but Collected Works had copies last night!]). & his air guitar blues, which had a few members of the audience joining in on the chorus. I'm looking forward to reading Testament, which is a reworking of his two previous books Un and Yes/No. self-plunder. huzzah. [I doubt anyone noticed, but if you saw me slumping down in my front row theatre seat during Lee's reading, it was only because I had finally found a position where my ears didn't ache & that had nothing to do with the reading, just with my damned sinuses.]

A word of praise too for the Collected Works book table, which had copies of the books of the features for the night but also other books by poets who wouldn't be at the festival & older books which are now difficult to obtain. 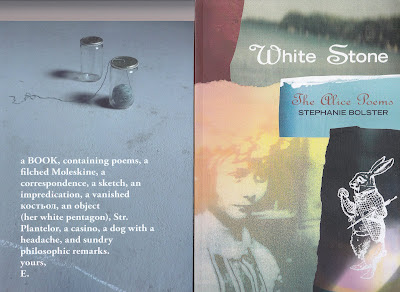 In addition to Testament, I also picked up Lee's Civil Elegies and Other Poems (House of Anansi Press, 1972, reprinted 1994), Stephanie Bolster's White Stone, the Alice Poems (Véhicule Press, 1998, Fifth (!) printing, 2005) & Erín Moure's newest, the Unmentionable (House of Anansi Press, 2012). There was just one copy of the latter on the table. Exciting! 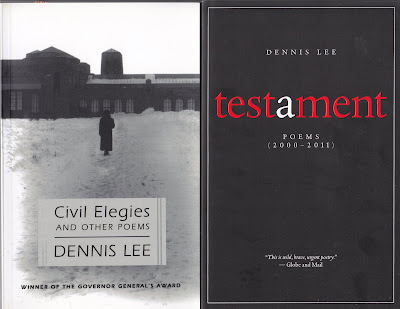 I enjoyed brief conversations with the writers, & old friends & new. & then returned home for meds, magic bag & hydrasense. I shall have to pace myself so may not be at as many events as I'd planned. We'll see how the week goes.
Posted by Amanda Earl at 8:13 AM