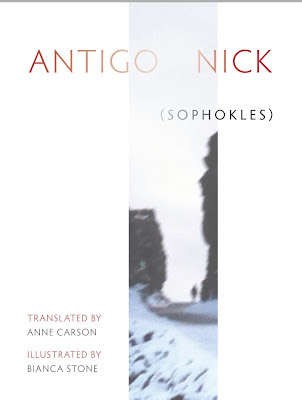 Nicholas Hoare Books is closing its Ottawa store due to NCC's exorbitant rent increase. while the store has never had a very large selection of poetry books, I will miss it. it has plenty of books that inspire poetry. & the mystery & memoir sections were excellent. shocking & sad news.

Where does a poem usually begin for you?

I begin with the ending. Most of the time. I have an ending in mind and I try to make my way to that ending. Endings are always on my mind. Often to the detriment of my beginnings.

from Emily Pettit's 12 or 20 Questions interview with rob mclennan

speaking of rob, he's open for poetry editing biz, so if you've got a manuscript, you should contact him.

& speaking again of rob, here's his review of Jenna Butler's latest book, Wells. apparently this is the first of a new University of Alberta Press series in honour of the late great Robert Kroetsch. wouldn't it be grand to hear Ms. Butler read from her new book here in Ottawa soon?

A new translation from M&S by Anne Carson? huzzah! from M&S's FB page: "Anne Carson has published translations of the ancient Greek poets Sappho, Simonides, Aiskhylos, Sophokles and Euripides. Antigonick is the first time she's making translation into a combined visual and textual experience. Sophokles’ luminous and disturbing tragedy is here given an entirely fresh language and presentation, making the fundamentally human issues of death and honor, family and morality as relevent as ever.

The text itself is hand-lettered on the page by Anne Carson, and this one-of-a-kind edition features stunning drawings by Bianca Stone printed on translucent vellum pages that overlay the text." On a personal note, I studied Jean Anouih's "Antigone" in high school & she is a character who has always intrigued/haunted me. One of the reasons I love Anne Carson's writing is that she renews my love of mythology, gets me to think about Greek & Roman myth again.

& speaking of new books & poets coming to town, i was hoping Marcus McCann & Natalie Zina Walshots with new books out from Insomniac would be coming to Ottawa this spring, but i don't see their names on any upcoming event lists. why in hell not. stamps foot. looks petulant.

Steven Heighton & Erín Moure talk about the concept of "post-national writing" & the state of book reviews in separate interviews in the Winnipeg Review. i found Moure's answer on the state of book reviews particularly positive: "The space and means for commentary on books is morphing. Blogs and sites like goodreads provide space for readers to interact more directly with poets and poetry, and to express their own opinion of the work...."

Had you heard of TWR before? I hadn't. apparently they publish a bunch of different things every quarter & there have been seven issues so far. Here, for example, are four poems by Jonathon Ball

Do you like book trailers? Here's one for A Beautiful Marsupial Afternoon, CA Conrad's new collection of (soma)tic exercises coming out with Wave Books.

& here's an interview with CA Conrad in which he talks about somatic exercises, a response to the real world daily grind….

Nine contemporary poets read themselves through modernism, a collaboration of the Kelly Writers' House & the Modernist Studies Association. I've only dipped a tiny bit into this, but it's exceptionally enjoyable. Ron Silliman reads William Carlos Williams; Rae Armantrout reads Emily Dickinson, Lyn Hejinian reads Gertrude Stein…& more! You can listen to the whole segment by each writer or click on individual poems (scroll down)…

Guardian Books talks about poetry pamphlets here. is this the British term for chapbooks or broadsides?

Got chapbook manuscript? submit it to Thrush

NPR's Tell Me More is running an April poetry tweetathon for National Poetry Month. Tweet poems of 140 characters or less to #tmmpoetry for broadcast in April.

Jacket2 presents a forum on the relationship between poetry & science with a panel of poets. . there's a lot here & I admit I haven't begun to explore its fathoms….but if you're thinking about writing poems that explore science, I'd recommend this as excellent reading.

The forum was inspired by a PoemTalk on PennSound. Interesting to hear Rae Armantrout's thoughts on science, after hearing her read at VERSeFest. she incorporates all kinds of disciplines in her poetry, including science. I like her idea that science, like everything else, is fair game for questioning, including the metaphors. this is a really interesting discussion with poems & musings included & back & forth discussions of the poets.

speaking of science & poetry, do you have Rampike Vol. 20 / No. 2? it's the Scientific Wonders issue & boy is it fun. I especially loved Steven Humphrey's Post-Organic Taxonomy - Plantae Typographica textefolium, Eric Zbyoy's Algorithmic Translations & J.R. Carpenter's Whisper Wire. all of which captured my imagination & sense of whimsy. & now Vol 21/No 1 is out: Poetics: Part One…

I have written of science, but only in the way Rae Armantrout talks about in the section on Disciplinary Pertinence: required expertise. I use the language of science I find in books written for lay people. for example I loved Sam Keane's the Disappearing Spoon And Other True Tales of Madness, Love, and the History of the World from the Periodic Table of the Elements . I knew diddly squat about chemistry, but his descriptions of the discoveries of the elements & the subsequent intrigues in the world of science were rivetting & i have been playing around with the elements in my poetry. Science inspires awe, responds to superstition, mystifies, demystifies…how can it not be part of poetry?

POETRY PROMPT: (another new & sporadic feature of PTWAE): read something sciency or visit a sciency-type place (the Museum of Science & Technology perhaps?)…write a poem(s)…