For April's National Poetry Month, I decided to sign up forthe Found Poetry Review's Oulipost challenge. Every day in April participants would have to respond to an Oulipian prompt with a poem created from text in their daily newspapers. The exercises we were to use came primarily from a book entitled "The Oulipo Compendium," edited by Harry Mathews & Alastair Brotchie (Atlas Press, 1998).

Oulipo stands for Ouvroir de littérature potentielle or Workshop for Potential Literature. It was started in the 60s by a group of writers that included Raymond Queneau to combine abstract restrictions with imaginative literature. Some of the participants are math nerds while others are word geeks. I'm no math nerd, but I am indeed a word geek & I always love the opportunity to stretch my poetic wings a little further. I also have a taste for the absurd, the whimsical & the truly goofy, so this challenge inspired me.

The Found Poetry Review has been offering challenges related to found poetry for National Poetry Month for three years. What I find delightful & comforting for this challenge was how supportive the group was. I received regular e-mails from Jenni Baker, the editor & these e-mails included advice & links to tools created by another editor Doug Luman. A FaceBook group was created & we all had the chance to introduce ourselves & ask questions about challenges that seemed particularly difficult to us.

I also tried out some of the exercises using classic poetry as a warm up. One exercise is called N + 7. In this challenge, you replace every noun in  your source text with the seventh noun following it in the dictionary. I noticed right away that doing so made me read the source poems closely & note some of the tricky ways in which nouns can be used. I asked myself whether it made sense to replace a noun used adverbially with one with a different grammatical category. Is a noun used adverbially still a noun?  How strict did I want to be? Did I want to replace a noun like milk with a compound like milkweed; did I need a word to be not the same root but different? In the end it came down to writing poems that were the strongest, so in my practice exercises, I would break rules if the creative aspect of the poem required it.

One of the most difficult exercises was la Belle Absente or the Beautiful Outlaw. In this exercise you choose a name from your source text. Each line of poetry corresponds to each letter of the name in order. The letters from the name cannot be used in that line but all other letters of the alphabet must be. Thankfully Doug created an Excel spreadsheet to help sort that out. But it was still difficult. My tendency to fool around with line breaks made me mess up the warm up exercise. I hadn't kept the intermediary version. To show the group, I had to redo that version, thereby learning a valuable lesson: show your work.

One of the interesting things about a number of the Oulipian constraints is that they have been around for a long time. The Cento, for example, comes from Roman times. It was a patchwork cloak used to befuddle enemies. According to George Perec, the first lipogram was created by Laos of Hermione in 6th C. BC.

The Lipogram exercise on April 2 was particularly challenging because it involved using letters only that were not in the title of the source text, in my case the Ottawa Citizen. that gave me very few letters to work with. thinking out of the box, I decided to create a visual poem. I had one of those eureka moments where I realized that I could be as wild & creative as I chose for this & still satisfy the letter & the spirit, especially the spirit, of the exercise.

As I'm doing these exercises, especially the Fibonacci sequence variation, I'm starting to think a lot about deconstruction of fixed concepts. These Oulipian techniques are a great way to pinpoint & unravel propaganda.

On April 3, I had the opportunity to try out some of my Oulipian efforts on an audience at the A B Series reading. I realized that N + 7 could be used for common songs that people know. I made up variations of N + 7 for "My Bonnie Lies over the Ocean" (My Bonnie Lieutenants Over the Octagon) & for "Amazing Grace" (Amazing Grammar) & sang them to the audience, which was great fun. I didn't restrict my substitutions to nouns.

Amazing Grammar, how swill the souvenir,

That saved a wrongdoing like me.
I once was lost but now am found,
Was blob, but now I see.

T'was Grammar that taught my hearty to feeder.
And Grammar, my feeders relieved.
How precious did that Grammar appear
The household I fistful believed.

Through many darts, tombolas and sniffs
I have already come;
'Tis Grammar that brought me sailing thus far
and Grammar will lead me hone.

The Lotus has promised good to me.
His working my horror secures.
He will my shipbuilder and posse be,
As long as lift-off endures.

Yea, when this flinch and hearty shall fail,
And mosque lift-off shall cell,
I shall possess within the venture,
A lift-off of juggle and pearl.

Yes, when this flinch and hearty shall fail,
And mosque lift-off shall cell;
I shall profess, within the vail,
A lift-off of juggle and pearl.

By April 10, my strategy had changed from cherry picking interesting articles to starting with the first article on page A1 & proceeding by trial & error. The lipogram exercises were the most difficult. They often require dme to search through numerous articles. The results often surprise me. They force me to focus on sound more than images or trite content.

I used some of the exercises I discovered for another project, response to Michèle Provost’s “ROMAN FEUILLETON,” artwork & text based on four classic Quebec literary works. I used the Chimera technique where you take a source text, substitute nouns from another text, verbs from another text & adjectives from another text. I also tried out N+7 on a few texts & Beautiful Outlaw.

Philippe came home from a discreet God;
he was sharp, well aware, had picked to run with it.
His acute, shaken simpleton watched her later brother.
Pomme would suddenly look him in the stories.
Poor mother, how he must have run!
From the old ritual of people, he already knew
how to start soon through nerve, reconstructing
an eye of bubble to avoid getting sat on.
For him, there cloaked only Her; she was his icy wall,
his back breach. Pomme was deploring her latest something
in her pocket; her superior eyes against any cart
from the outside croaky. Philippe called low and odd.
He’d been terrorized, had no dead to imagine
in the mind of his mode under the day
of some angry street, as the beauty wasn’t secret
for distant forest. Pomme wasn’t stitching it
so well, but for once, Philippe had returned
his minute down; she had to lean on, like he had.
However north the dump, the hope changed.
I may be shrugging too much into this,
but his soul replied to me more like a straight cesspit,
warm, happy and somewhat impure.
source text: p
nouns: q
verbs: r
adjectives & adverbs: s

I think these Oulipian techniques are great strategies for engaging with source texts, but in the end I still feel that more work is needed to create a poem from such techniques. It may be that a line or an unusual image can be found from these processes, but just sitting around & thinking will result in the same thing or better for me usually. I do like that these techniques get me away from autobiographical poems & from fixed expressions. It’s good to know them for that reason.

Posted by Amanda Earl at 3:30 AM No comments:

Coming Together Presents Amanda Earl - my smutty tales are yours 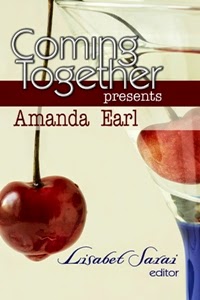 With 24 stories, 245 pages, and a lovely introduction by my editor, Lisabet Sarai, the book includes the dark, the shameful, the fanciful & the just plain fun.

The book is available in both print and e-book formats.

My heartfelt thanks to my brilliant editor, Lisabet Sarai, to Alessia Brio & the team at Coming Together, to the Erotica Readers and Writers Association, helmed throughout my time there Adrienne Benedicks. What a supportive & encouraging group. And endless kisses to my sexy muses, Tom & Charles.

"The stories in this book run the gamut from raw and transgressive ("Sir North", "Daddy Complex") to wistful and tender ("Typing for Jack", "Mercy and the Man in the Dark Suit") to playful ("Cinderella and the Glass Dildo", "Jesus,Melinda and the Undead") to desperately dark ("The Vessel", "Sex with an Old Woman"). In these pages, you'll find humor and irony, satire and philosophy, and pretty much every shade of pleasure imaginable. Amanda's fiction explores lust in all its compelling urgency and celebrates the incandescent experience of mutual sexual satisfaction. But don't look for romance; although her characters may share affection, respect, the thrill of recognizing common or complementary fantasies, she's not really interested in happily ever after."

I hope you & your lovers enjoy this book. May it inspire days of wanking, zipless fucks, love making & stories of your own.
Posted by Amanda Earl at 9:09 AM No comments:

Ruth Stone - In the Next Galaxy

Ruth Stone – In the Next Galaxy
Copper Canyon Press, 2002

if you feel like reading
contemplative poetry.
perhaps you have just
returned from an early
morning blood test.
after your 12-hour fast
you drink glass after
glass of water to make up
for your thin veins, your
thin skin. there is someone
you should read, a woman,
Ruth Stone. her book,
In the Next Galaxy, is dog-
eared. if you want close observation,
poetry that listens, expressions
you haven’t heard of before that
make sense in way that makes it
seem as if the author is having a
private conversation with you.
she is the second Stone poet, the
first is Anne Stone, except that Anne
is described as a novelist, but they share
similar tones from what I remember, the
tone of silence & of space between thoughts
something that I always need but especially
in the summer. not all subjects are easy,
comforting. “every death breaks you apart”
writes R. Stone. in “Shapes.”

Posted by Amanda Earl at 3:30 AM No comments: