A Book of Saints now available 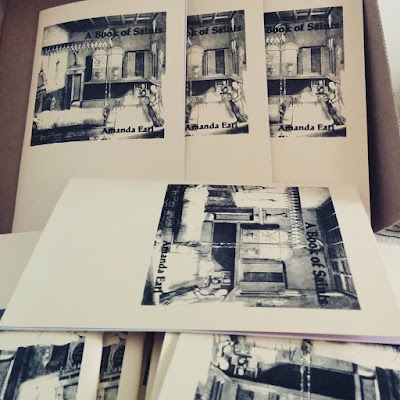 my latest chapbook is now available through above/ground press. A Book of Saints is an excerpt from a longer work entitled Saint Ursula’s Commonplace Book. It is the third  chapbook from the work to be published. After Ursula (AngelHousePress, 2008 – limited edition 26 copies) (expanded from a single poem published by Vancouver's Pooka Press) and A Book of Miracles (Dusie Press, 2015), which was published in a limited edition of 60 copies for Dusie Kollektiv 8.

I offer my heartfelt thanks to rob mclennan of above/ground press for publishing A Book of Saints, my fourth chapbook with the press after Eleanor (2007), The Sad Phoenician’s Other Woman (2008), Sex First and Then A Sandwich (2012).

What rob does with above/ground press & his other initiatives is heroic, publishing the unheard of, the established and the obscure in large quantities, sending these copies to all and sundry, and giving poets an opportunity to read our work at launches in Ottawa, promoting the work tirelessly and supporting us with fervour.

A Book of Saints is part of a journal or commonplace book, a type of scrapbook where people compiled information such as recipes, observations about life, quotations and poetry.

The Breton princess Ursula lived in the fourth or fifth century. There are variations of her story. In one version, she was travelling by ship with eleven thousand virgins before meeting her groom, a Pagan. The ship was attacked by Huns, who killed all the virgins, including Ursula.

One day I encountered a homeless woman who was speaking to herself in the form of what sounded to me very much like religious prophesies. Thoughts of this homeless woman stayed with me. For some reason I thought of Ursula.

When I was hospitalized in 2009 in the Intensive Care Unit, I developed ICU psychosis. It was a frightening experience that led to severe delusion and paranoia. It made me concerned for those who have to go through such experiences as part of their daily lives. Part of the scope of this work is to explore and incorporate the delusions I experienced into the poetry.

In the manuscript, a woman prone to wandering finds the journal of the homeless woman, who believes that she is Saint Ursula. The journal is full of art, poems and descriptions of her dreams and quotations, bits of detritus and flowers she has gathered…

In A Book of Saints, our modern day Ursula writes her journal entries as poetry on saints days.

My sources for the saints days were the online Catholic encyclopedia and Saints, a Year in Faith and Art by Rosa Giorgi (Abrams, New York, 2005). Both of these rely on the Catholic Church's liturgical calendar. Names of feast days are taken directly from these sources. In some cases there were differences. I chose the ones that resonated the most for Ursula.

My process was straight-forward. On a particular day when I was writing the work, I opened up Saints to the day and used the saint of that day to inspire the work, to inspire Ursula’s preoccupations. I have been fascinated with this imaginary woman, my homeless character for seven years. She haunts me in the way that she herself is haunted by the saint.

Saint Ursula’s Commonplace Book consists of six sections: INTERSTICES, these are poems written by the wandering woman; A BOOK OF SAINTS; A BOOK OF MAGIC; A BOOK OF MIRACLES; A BOOK OF HOURS; and A BOOK OF URSULA.

Some of the poems have appeared in Arc Poetry Magazine, the Peter F. Yacht Club, , and Jacket2, an online magazine from Australia.

The patron saint of this work is bpNichol. In the course of writing the manuscript, I read and was influenced by his master work, The Martyrology, a long poem in 9 volumes published by Coach House Books.

I am grateful (not at all a strong enough word to describe what joy I felt) for funding received by the City of Ottawa in 2014 for the creation of Saint Ursula’s Commonplace Book.
Posted by Amanda Earl at 7:16 AM