i've decided that i will take part in the Found Poetry Review's IMPROMPTU experimental writing prompts for this year's National Poetry Month.

The first prompt is actually a choice of prompts offered by New York poet and librarian, Patrick Williams. He created a prompt generator that combined "old books, subject headings and chance." The prompt generator links to  "nearly 200 serial publications from the New York Public Library’s holdings with the year 1916 listed in their catalog records." 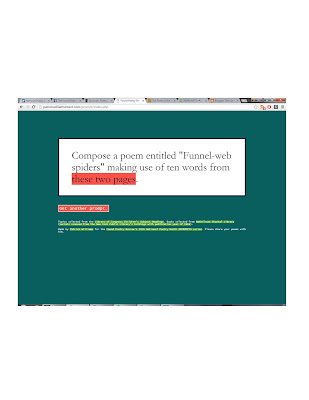 
which linked to two poems from "The Poets of the Future, A College Anthology for 1920-21": The Silver Moment by Louis Zukofsky and Evening Song by Frederick H. Lape.

I love the library and anything to do with libraries.

For this prompt, i chose not to find out whether FWS's existed, I chose to go with my imagination.

I didn't follow the rules exactly, I used more than 10 words. I gave my FWS critters 21st century troubles.

at the footfall of sadness
fade slowly, slowly as
sunset, their wings

I have no idea how many of these prompts i'll do. I'm not going to be rigorous about it. Why don't you play along with me?
Posted by Amanda Earl at 6:42 AM

I love the last stanza!

thanks. afterward, i googled funnel-web spiders and discovered they are the most poisonous spiders in the world!