One Thing Too: Dominic Bercier 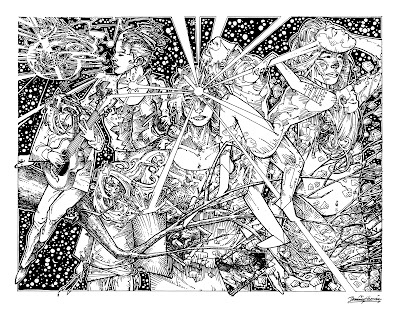 Shine On…
Hope. “What if hope exists only I cannot see it!?” This phrase kept me alive during my very darkest hours. Hope did not return quickly. It did not come with trumpets blaring. But it did arrive.

I drew the above illustration on ‘ART’ exactly 20 years ago while still in high school. I was quite the little star in my small fishbowl world. I had won the Visual Arts Medal and was poised to win the Artistic Excellence Award a couple of years later. It was a big deal. Fellow students pegged me as working for big comics publishers within only a few years. But that never happened.

Well, it sort of did… After turning down an artist’s invitation to submit to Marvel Comics, Dave McKean told me to go to art school and so I did. I was a talented draftsman, I had an old soul, I was ready for comics, but I listened to his advice instead and went to OCAD in Toronto [I was never one for easy paths]. OCAD turned out to be both a blessing and a curse. I became more versatile, quicker, and… more unpredictable; I had become an editor’s paradox of good surprise / different surprise. At OCAD, I met lifelong friends and I did well, but as the years went on from four to five to six [as I was working as assistant-penciler on gigs for big publishers full time – my fifteen minutes of un-credited fame], I started to lose my grip. I was unhappy, unfulfilled, and unable to speak about it with anyone. I persevered silently, finished school, but within months of graduating, I found myself squarely in what I called my “dark night of the soul.” And I festered there and went to a dark, dark, place, from which some do not return. So I went on a lark… and I asked myself : “What if hope exists only I cannot see it!?” It was either to have blind faith in that idea or, well…

It was my greatest experiment. And my conclusion is that hope does return. Not quickly. Not ceremoniously. But it does.

Many of my friends in the USA are now living in fear and despair. To you and to them I tell you to believe in hope. In fact I’ve thought about it quite seriously and have come to understand that I myself can do the following to foster hope in others :

It is a miracle that hope ever returned to me. And so I believe in miracles now. And now is the time when we need miracles the most. *I’m not talking about religion, or even spirituality, I’m talking about the human condition… Like that little bottle of light when Frodo is near the end of his quest, so too does your hope shine when things are at their darkest – just reach for the light.

So… as Pink Floyd would say : “Shine on you crazy diamond!!!” We need you now… more than ever.

your invitation:
tell me or show me one thing. it doesn’t have to be profound. it could be visual or written or a combo of both.  it could be about your work; it could be an artefact or a glitch, a link to some film or tv show you’ve watched or a coffee place you like. it could be short or long. i’ll post it along with a link of your choice to your work or somewhere else. disclaimer: i might choose not to post if it doesn’t suit me.
your reward? send me your mailing address & i’ll send you something whimsical…
it’s dark out there this summer  fall/winter [since the election of that motherfucker in the USA etc] ; i think we need an injection of whimsy / duende.
so fire away. svp. amanda at angelhousepress dot com
Posted by Amanda Earl at 3:01 PM