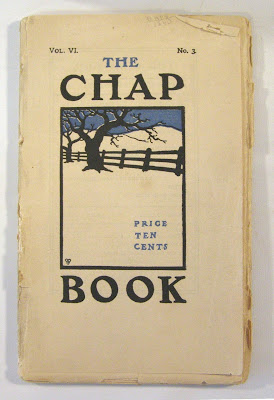 Recently after a chapbook of mine was accepted by a small press, I received a formal six-page long publishing agreement, giving them carte-blanche to use my name for promotion, to an exclusive right to the work without any kind of a term stated and a fairly ambitious marketing and promotion plan for a chapbook. To be fair to the press, they did mention in an earlier e-mail that their plan usually includes a written agreement, but either I didn’t notice that or I thought it was some kind of blanket form letter e-mail not relevant to chapbook publication because I sometimes deal with presses that publish both perfect-bound books and chapbooks.

While I have signed contracts for paid publication in literary magazines and once so far, for a perfect bound book,I see no reason to sign a chapbook contract.

Is this a double-standard? No. In the case of the chapbook, the run is limited to a small number of copies (so far the maximum run I've seen is 200) and there is rarely payment. I've never received payment for a chapbook myself.

In a decade of publishing others and more than a decade of having my own work published in chapbooks, I have never before encountered chapbook contracts. After withdrawing the chapbook, I canvassed a few writer pals and small press publishers informally. I found out that at least three small presses in Central and Western Canada provide a formal contract that the author is expected to sign. And I am unsure in each case, whether the author was paid for the work. If so, that's a different story. In one case, the contract was limited to a promise made by the author on length of time before republishing the work in the chapbook.

A contract for unpaid publication is not the standard so far and the micropress publishers I talked to felt that the practice was excessive.

Proponents of chapbook contracts expressed the idea that it’s good to lay out all conceivable terms and that the contract protects the writer. This is going down a rabbit hole for a very small and time-limited publication opportunity.

The terms for a chapbook are very limited: number of copies published; number of free author copies; price to author for additional copies and possibly, but not essentially, a request from the publisher for the author not to republish the work for a limited time.  These are simple terms and can be dealt within an e-mail.

For instance, for AngelHousePress we do a print run of 50 copies, give 10 comps to the author with an option to buy additional at half price. We don’t do reprints and we don’t publish any of the person’s work from the chapbook without seeking permission first. If someone doesn’t like those terms, they are free not to publish with our press.

Once the work is out of print, they can do with the work whatever they like. To be frank, in our case, if someone immediately republished the work right after we published it, we wouldn’t have any recourse. Or if they published another chapbook at the same time as the one  they’ve published with us. So the worst thing that happens for us is that we don’t sell as many copies as we might have or it takes longer than we thought. That’s really not a big deal because our expense is not that high in the limited runs we produce. Therefore the risk to us is low and the risk to the author is low.

If we don’t publish the work by the time we’ve promised and we haven’t communicated to them a reason, it’s their work; they can publish it elsewhere. This hasn’t happened to us ever. But if for some reason, such as death or ill health or the world’s impending end, we cannot publish a manuscript, we will kindly let the author know and apologize profusely.

Contracts are in formal, legal language and usually contain stipulations regarding exclusive print and electronic rights either for North America or World-Wide. I’ve signed plenty for writing that I’ve been paid for. For a story or a poem, these contracts have been a couple of pages in length and have been limited to a particular term.  For my only poetry book so far, the contract was a bit longer and I received an advance for the work with the promise of royalties if revenue exceed the amount I was advanced.

Micropresses function based on good will and reputation. Authors or presses who don’t keep their word are simply not dealt with again.

Here’s a question to small presses who insist on contracts: if your author signs the contract and then breaches it, are you going to sue? For a chapbook given to you for free that you will likely already cost you more in expenses than you will gain in revenue?

If you’re an author and the chapbook publisher goes back on your agreement, are you going to sue? Or are you simply going to move on and not publish with that press again and let all your fellow writers know what an asshat the publisher is? The risk to both author and publisher in the case of a chapbook is simply not great enough to cause the need for a complicated contract.

I’ve dealt with 15 micropress publishers to date (2003 – 2017). Other than one misunderstanding about print run, which was settled via e-mail, I’ve never had any other problems with any of these publishers. Micropresses are usually run by one or two people out of a labour of love and the urgent need to get great and uncommon work in the hands of those who would appreciate it.

I love chapbooks, but they are penny candy. They are there to be bartered and exchanged and mailed around and enjoyed. Small presses come from a tradition of anti-establishment, non-conformist, independent thinking.  If you’re going to require me to hire a lawyer to negotiate a complicated contract, you’d better be paying me some serious dollars.

I worry that signing a contract for a chapbook might open authors up to legal risk and to difficulties in getting the work republished because they will have to disclose the contract to subsequent publishers, should they want to publish it later.

Contracts are always written to protect the organization that created the contract, not the other way around. When payment is received, the author has a valid reason to sign away some rights, as long as they are limited, but otherwise, why bother?

My own philosophy is to embrace the ephemeral, uncomplicated nature of the chapbook and move on. I am not so excited by the chance to have my work published that I will agree to constraints that may cause issues later.

I have a request to publishers who require a contract for free chapbook publication, please include this information in your calls for submission, so that I know to avoid you. Thanks.

Sorry for the addition to the post, but I thought of something else that seems germane: Rather than presenting the writer with a fait accompli in the form of a legally binding contract, why not treat the process more as a dialogue, a consultation for anything that's more than the basics. Work with the author rather than against.
Posted by Amanda Earl at 2:47 PM

what's a bad sign: a contract or my response ;)