Sunshine after the Fog-Camille Martin @ Tree 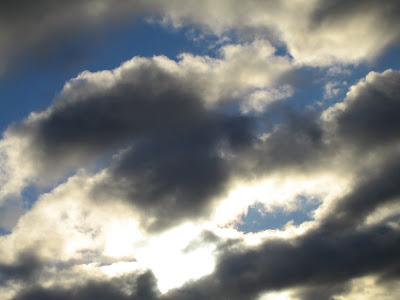 Camille Martin read at the first Tree of 2008 last night. Camille is originally from New Orleans and moved to Toronto in 2005 where she teaches literature and creative writing at Ryerson University.

In addition to her poetry, she takes photos and makes collages. Sometimes these acts are combined. Her chapbooks include seasame kiosk (Potes & Poets, 2001), rogue embryo (Lavender Ink, 1999), magnus loop (Chax Press, 1999), and Plastic Heaven (Fell Swoop, 1996).
She read work from her first full-length collection, Codes of public sleep (Bookthug, 2007), sonnets from West Coast Line and some additional poems that may have been new work

Codes of public sleep is a wondrous book full of wordplay, imaginative juxtapositions, soft, soft language, dream like states and lyricism. I like the way Camille makes use of repetition to create a trance-like effect. There’s a formality also to her syntax that contributes to the dream-like cadence of the lines.
She read one poem from West Coast Line that was a series of lines with end rhyme or internal rhyme. I’m not often a fan of end-rhyme, but this poem was really well done. Nothing awkward about the rhyme or the word order. Another poem was a nesting poem that went from a tree, to a bird, to a nest, to baby birds and ended with seeds. The accumulation created a dramatic and powerful effect.

Some of the most effective poems were those that Camille plundered from her dream journal. One of the sonnets was inspired by post-modernist Gilbert Sorrentino’s book, the Orangery (University of Texas Press, 1978). I loved the way Camille ended many of these poems in the middle.

I have to say that I loved the book and I really enjoyed hearing Camille read from it and from her other work. There was something surrealistic and dreamlike in the way she assembled the words, particularly the abstract concepts. Her poems did feel like collages to me. The work reminded me somewhat of Jan Allen’s Personal Peripherals (Buschek Books, 2006 and Stanzas, Volume 1, No 32, above/ground press, 2006) in the way in which abstract language was juxtaposed with concrete images.

Another writer that sprang to my mind when reading Codes was Roland Prevost. He plays around with abstracts in a similar way in his chapbook MetaFizz (Bywords, 2007). There is also a similar formal cadence to his lines.

Camille’s work was a delightful surprise for me. One of the signs that someone’s poetry is affecting me is when I start to write a poem in my head in the middle of reading one of theirs. This happened to me with Codes of public sleep. I found myself composing a poem as I was reading. Camille’s poetry reminded me of what was possible, that there are no limits to what one can do with words. This is the reaction I have with experimental poetry. I feel open and want to join the party.

I’m not going to show any of Camille’s poems here because she has a wonderful Internet presence. Here are just a few of the sites/publications where her work is featured:
The Walrus
This Magazine
How2 Journal
Puppyflowers
Spidertangle
....

awww heck, i can’t help myself. here is one of the poems from Codes of public sleep that she read last night and that i particularly enjoyed. from the section Letter Letters:

hello, i’d like to sleep in a little puddle
during the hot season under a suspension
bridge, the childish ruse of a morning strewn
with straw to un-name beasts
and their shadows, a faint song to waft
from a bell jar. i’d like a savage birth
in fields of sharp grasses, false
islands beckoning to lost swimmers visualizing
their cameo appearance among archetypal palms.
even as colours parade emptily
through my durable eyes, i’d like flaming
patterns to stir nothingness in my smiling brain, bones
aglow to dispel the game of granite mist, a candle
at the edge of prison to illuminate
the perforated moments of my pretended liberty.
and if my attention wanders
from the episode requiring the estrangement
of my character in which my solidly
collective life form winningly mimics
its own role if my attention wanders, i’d like
to be acted superbly by extras, resolute
if deluded that i dwell in countless earlier stages.
and even though memory is bluntly mimetic
of a derivative intention, dislocated
from my stockpiled personal activity, i’d like
to protect its inevitable rhythms, if not my threadbare
belief in the precise analysis of jumble.
it’s hard to find a self to cheer up,
but i’d like to encourage the obvious, and then
split, incidental, if true.

Hi, Amanda, I'm happy that you enjoyed my reading. It was a pleasure to meet you and hear you read that evening as well.

I discovered her words in the walrus, a friend brought them to me, saying they reminded her of mine. I was beyond flattered, obviously, and wished it were true.

As I read your comments, I felt her coalescing up from the 2 dimensional page into space, becoming substance. Thank you. Apparently I will have to pursue this.