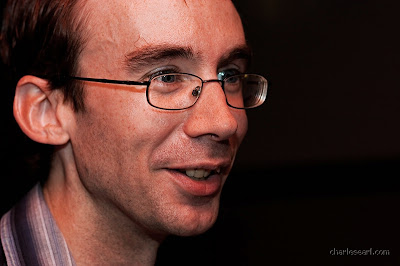 Charles and i first met Steve at Café Nostalgica back in the fall of 2001 when Kristy McKay and Trevor Tchir began the Thursday Night Open Stage for Music and Poetry. I hadn’t read much before and was pretty nervous and so was Steve. The audience was full of students, mostly intent on the music and the drink and each other. Getting them to pay attention to poetry was no easy feat, but it wasn’t long before everyone was laughing at Steve’s spoken word pieces, mostly autobiographical, making fun of his trouble getting girls or his thinness or geekyness. The open stage was a mixed bag of poetry, with various styles, lots of angsty woe is me stuff or smut or comedy or serious poems about snow and flowers, we had it all. Along with the musicians, we became a pretty tight community and Steve was very much part of the community.

in 2003, Trevor decided we should record a live CD, Thursday Heroes. we had a fantastic time during the recording. Steve was wonderful and funny, in fine form. His poem, Sweetest Marie, is on the CD. Others on the CD are Kristy McKay, me, John Gillies, Max Middle, Kris Northey and musicians Trevor Tchir, Emil Pelletier, John Carroll, Peter Webb, Kevin Grant, Rozalind MacPhail, members of the now Soul Jazz Orchestra and others. i’ll never forget how much fun it was to be part of that community and how much i learned about performing, a lot of it from seeing Steve develop his style.

in 2004 after Trevor and Kristy moved to Alberta, Charles and i mostly stopped going to the open stage at Café Nostalgica, so we didn’t see much of Steve, but when we heard he was in the hospital for open heart surgery, we went to visit him. i still remember laughing with him over his body being too long for the bed in intensive care. even then he was laughing, trying to make the best of things.

during his recuperation and after that we didn’t see Steve much, just off and on at readings over the years. i followed his livejournal blog. i was so happy when he and Faye met. both very strong creative forces, both loving people.

like for many artists, Steve was constantly in and out of work, trying various stuff. at one point Charles ran into him near his office in the east end, where he was doing manual labour. we were both very worried about Steve at that point, but somewhere along the line, even work was getting straightened out. he’d started at Algonquin College where he’d discovered a love and talent for graphic design. he got work at NRCan and things seemed to be going great.

i’m not much of a follower of spoken word but i was always pleased to hear when Steve did well at the slams and he was on the Capital Slam team more than once from what I understand.
i witnessed his meeting of jwcurry at the Ottawa Writers Festival a few years ago when we were there to see a documentary on the local poetry scene. i can’t remember who was wearing the Frank Zappa t-shirt, John or Steve, but they were quite excited to find mutual admirers of Zappa. i remember smiling at the meeting, two people from very different sides of the literary community, but with something in common.

then just recently, in August, Warren Dean Fulton came to town and organized a wondrous pub crawl “In Search of Harvey, the 1st annual pooka pub crawl” Steve decided to come along. It was ages since we’d seen him, so it was a great opportunity to hang out, get drunk together and write poetry.

i know it seems at times like there are quite a few differences and groups within Ottawa’s literary community, but Steve made his mark on the community at large and this goes a long way to showing that we’re really all in the same family. i respect what Steve achieved with his poetry and admire the closeness of the spoken word community here. they’re good folks and they care very much and support one another as they did with Steve.
on behalf of Charles and myself, i send love and condolences to Faye and all those who knew Steve. we share in the celebration of his memory.

This is a beautiful tribute. It's nice to know that not only do you have wonderful memories of the times you spent together, but you have a CD with one of his performances as well.

thanks. i don't know if any of the CDs are still available, but if so, they'd likely be available thru wwww.capitalslam.com.

Thank you for posting a beautiful tribute about a dear high school friend. I got an email this morning about his passing and have been searching on and off throughout the day to find some connections to the friend that I lost touch with when he moved away from Windsor. You filled in several of the gaps for me. Thanks

thank you and my condolencees on your loss; also see ottawapoetrynewsletter.blogspot.com and some facebook groups if you're on there.