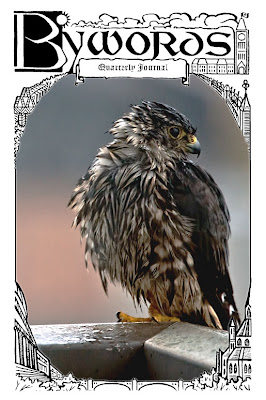 we will also be at the Ottawa Small Press Book Fair on Saturday, November 5, 2011.

the first weekend of November is a literary hotbed. hope to see you at all of these, dear Ottawans.
Posted by Amanda Earl at 9:25 PM No comments:

Enthusiasts of the written and spoken word, here are some of the shows that i know of that have such content on CKCU FM & CHUO FM:

Literary Landscape with alternating hosts Kathryn Hunt, Christine McNair, Bardia Sinae, and Neil Wilson, 6:30pm Thursdays (i still remember with great fondness Jane Crosier who started Literary Landscapes and hosted it for many years before her death a few years ago)

Not to mention great music, especially by independents, interviews about what's going on in Ottawa and the wide world from theatre, visual art, dance, music, sports, politics, the environment, economy.

The CKCU fund raising drive is happening now. If you want to help keep the shows alive, please call 613-520-3920 or go to www.ckcufm.com and click on "secure online pledge" to donate.

Literary events and writers have always received a lot of promotion and support from community radio. Now's the time to give back. Thanks to all who host the shows and help make community radio come to life.
Posted by Amanda Earl at 8:07 AM No comments:

the theme of today's noon session at the Ottawa International Writers Festival was "Is it hard to be funny?" with readings by Miriam Toews and Christian McPherson, with a discussion moderated by Citizen columnist Peter Simpson.

Miriam read another excerpt from her latest novel, Irma Voth (which she also read from last night), and Chris read from his first novel, the Cube People. it was a pleasure to hear both of them read. Peter talked about the different type of humour in their works, Irma Voth has humour tinged with sadness, whereas the Cube People & Chris' poetry tend to be exaggerated, reductio ad absurdum slices of life that take on a surreal quality.

Peter began with a joke to show that we all react differently to humour & then a quote from a recently deceased Canadian writer/critic named Eric Nichols (sp?) (i could have misheard, can't find any mention of such online). the quote described humour writing as a low calling. i think i understand what this meant. when writers use humour in their work, it is often seen as low brow, which is odd considering that humourous, ribald & bawdy writing has a long tradition. think of Rabelais, for example. humour has always been a way to critique the status quo, societal convention & those in power.

naturally both Chris & Miriam disagreed with the characterization of humour writing as a low calling. for both of them it seemed that rather than deliberately trying to write humourously, the humour naturally happened. Chris was a class clown as a child, Miriam finds humour necessary when faced with trying times.

when i think of the word comedy, i think of the multiple meanings, of humour but also of day to day lives, of Balzac's la Comédie humaine, Italian's Commedia dell Arte,Dante's la Divina Commedia, the word comedy being used to describe the day-to-day lives of civilization or the theatre of the everyday or travels from one state to another...

both authors were asked once again, i believe by members of the audience, about the autobiographical connection to their fiction. this subject comes up a lot with audiences. i'm not quite sure why it is so important for readers to find an autobiographical connection. i am content to read literature as made up with universal truths being pointed out or questioned. in the case of both Miriam and Chris, real life certainly factored in to their writing, but doesn't it always?

last night David McGimpsey & Rob Benvie read and performed and there was much humour in their work, especially David's. yet i can't help mulling over the lack of attention to works with a comedic bent. one of my favourite poetry collections, Stuart Ross's Hey Crumbling Balcony: Poems New and Selected (ECW Press, 2003) for example or Gary Barwin's writing, full of humour, Alice Burdick's Flutter (Mansfield Press, 2008)--. and of course, the brilliant and humourous word-play of the late and dearly missed John Lavery. award worthy writing.

humour is a literary device that can be used to surprise readers, to turn them away from the expected. in various guises, it can offer a new way of thinking about something--a contrast with its conventional sense, a parody, or a societal critique. in these absurd times, we need humour now more than ever.

my own taste tends to run very much toward dry wit, found in the work of such writers as the late Roberston Davies, or howling puns. Peter Simpson gave the example of Mordichai Richler in Barney's Version. he cited a passage where a man who is dying of a heart-attack calls an emergency number and is asked to choose 1 for French & 2 for English, then he gets put on hold and has to listen to Mozart's Requiem Mass.

the event was engaging and has inspired much thought about humour and its role in CanLit. this is one of the reasons why i enjoy the Writers Festival, it inspires thought & more reading, writing, discussion...

i'd be curious to know about your favourite humourous poetry & fiction by current living Canadian writers, so if you can think of any, let me know.
Posted by Amanda Earl at 3:54 PM No comments: 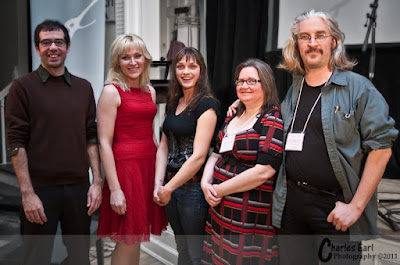 Congratulations to the winner & honourable mentions. All the info is here.

Ottawans, please join me on Saturday, October 22, 2011 at 8:30pm at the Knox Presbytarian Church, 120 Lisgar St (at Elgin). This is our 8th annual celebration of the poetry of John Newlove, a Prairie poet who lived for the last 17 years of his life in Ottawa.

We will launch Beneath Black Surface, the chapbook of last year's winner Winter Fedyk. We will announce the names of the recipient of this year's award and the honourable mentions. The judge this year was a. rawlings. There will be a reading by the winner and the honourable mentions and music by Jesse Rose on her six string baritone acoustic guitar.

The readers will also read selections from John Newlove's poetry. This is an opportunity to remember and celebrate one of Canada's greatest poets.

Winter's chapbook will be available at the Festival store on site, at the Ottawa Small Press Book Fair on November 5, 2011, and at the Bywords.ca store.

Please come enjoy the music, poetry, a cash bar & surprises! This is a free event.

Thank you to the Ottawa International Writers Festival for their ongoing support of the John Newlove Poetry Award and of Bywords.ca and the Bywords Quarterly Journal.
Posted by Amanda Earl at 2:45 PM No comments:

the Prose-Poem Project features excerpts from All the Catharines

the Prose-Poem Project is an online and print literary journal devoted entirely to the prose poem. i am enamoured with the form and have been playing around with it now for the last three or four years, not exclusively but often.

All the Catharines is a work in progress for which I have received funding from the Ontario Arts Council's Writers' Reserve grant via Arc Poetry Magazine and Descant in 2010. It is made up of prose poems, free verse, sonnets, couplets and so forth. I still have much work to do on the manuscript. Here are a few excerpts in the Prose-Poem Project.
Posted by Amanda Earl at 12:03 PM No comments: 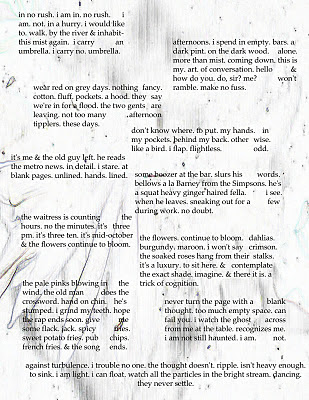 & birthday play list is here
Posted by Amanda Earl at 12:00 AM No comments: