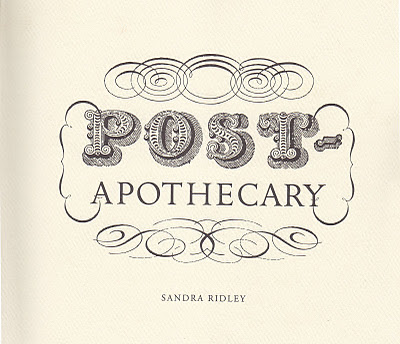 Post-Apothecary. Sandra Ridley. Pedlar Press.
in her interview with Michael Blouin over at Open Book Toronto, Sandra mentions that she has never been overly concerned with narrative but with tone & creating an atmosphere, the embodiment of emotion. she succeeds in creating a strong atmosphere with this book. somehow deftly she manages to communicate emotion thru the use of recurring imagery, onomatopoeic sound, & an appeal to all of the senses, including pain. the images are so sensory, so visual & emotive, I can imagine the poems being painted as individual scenes from fairy tales, with blood reds & moss greens. I admire Sandra because she does what many poets fail to do; she creates a tension, evokes the dark. it's not all pretty out there. yes, there is a prairie rose, but its petals have been plucked bare.

here's a bit of a jumbled play-by-play as I reread the book & try to type in my notes as I go. being occasionally distracted by the epigrams, by a word I have never heard before & then returning…

in the PROLOGUE, we begin with a she in a poem entitled "Pulse." notice the repetition, the disordered syntax, the medical terms, emotional terms. sparseness. don't bother saying what is obvious & yet it is there. couplets. tension between the real & the imagined.

the first section "REST CURE" begins with light--a Denise Levertov epigraph. poems in sequence numbered with lower-case roman numerals. much space on each page. repetition, mention of nightshade & wormwood, hawthorn, camphor, laudanum, plum cordial & corset gives an old-fashioned feel & the rhythm is incantatory. there is the outside, a topiary maze & then a he. what is real & what is metaphor. it's all very dream-like "his hand pressed/forward/to his switchboard/& mirror"

lots of lax i's, long o's, diphthongs & short a's. & knowing when to break the long line into fractured pieces. adds to the fretting of the She. her disorientation.

this is a book to be read aloud in a quiet voice:
"In a cocoon of luna moth or star-shroud, she lies or wings there in her hectic flush,
tenterhooked & breathless -- coughs, seethes. (iv. REST CURE)

you get the impression of much research to get the era right. even though time isn't explicitly mentioned. "strapped to her hemlock pasteboard pocket flask" (ix. REST CURE). "Before Cerletti & Bini" (Tincture of Mandrake in APOTHECARY) to do with a new method of electro convulsive therapy back in the 20th C. (google says)…

in this book we have touch, taste, sight, sound & smell

the image of flowers recurs:
some of them are part of the treatment from an apothecary but others are not:
Willow-straw & wildflowers in sparrow-nested hair; a welt of primrose.
"A prairie rose./Pale bud plucked petalless." (O Opheilia : O Crazy Jane, POST-APOTHECARY)

the image of the fawn recurs. the image of a girl not found for days. (Anterograde : Retrograde, POST-APOTHECARY). wings. feathers.
at the end of REST CURE, the image of a fawn, "sun-struck" "hind legs buckling" (xii. REST CURE).

the space considerations are well thought out. every indentation, every placement seems to fit with the emotion & tone of the text, from long lines, to last fragments, hanging off the edge of the page.

APOTHECARY begins with walls, an epigraph from a poem of Nicole Brossard's. each poem in this section is titled. the poems have long lines, take up the entire top half of the page. the pace feels faster. in Blood-let, the first poem, there are hard b's & t's repeating & repeating. images become more violent in this section, dreams of a tree killer, deliberate destruction, containment behind barbed wire fences. frenzied delusions, again the tension between what is real & what is imagined. "Thin man with a broken accordion tips his top hat toward her & bows." (Decoration of Sassafras - APOTHECARY) "sparrow skull held between fingertips" (Paste of Bear Paw - APOTHECARY)

PHANTASMAGORIA begins with seeking & finding the you. an epigraph from an Adrienne Rich poem.

This short section is lower-case roman numbered prose poems with end stopped lines to make squares on the page. there is still a he & a she but suddenly an I and a my, an empty bed, his footsteps coming up the stairs. "my sugar cube in her mouth keeps his taste away." (iii. PHANTASMAGORIA). memories of the outdoors, black-eyed susans, a cold lake, swimming away. escape.

in vi. there is now a you and a me: "if you would have just talked & not/held me down & if she I were not I but you by those ivied walls."

POST-APOTHECARY begins with forgetting. an epigraph from Daphne Marlatt. forget. the poems in this section are titled. some go on for more than one page. some are prose poems, some are couplets, some are spaced to give the text room to breathe.

once more there is a you. & a she. a sense of awakening from a dream, from death. there is the catafalque, the calla lilies (Weaken : Swoon). "She is ready./She is ready." (O Ophelia : O Crazy Jane, POST-APOTHECARY). the I & the my become prevalent. poems become more linear, more narrative, less-fragmented. we return to repetition of the beginning: "Summon the body still moving at the edge of the road. Summon lung-song, nocturned breath. Summon howling… (Concatenation) until "Yes. I am breathing on my own./On my own. (Wounds : Sutures). we have the fawn, the she & the fawn come together in Concatenation & the my. moth & mouth. water returns from its earlier role when the she swims into a cold lake, floating her dead man. now "Water does not grab & hold her under./It is the depth & the cold & the dark that convinces her to close her hands.// Give in." (Current : Calm)

the EPILOGUE repeats the sentence: "I thought I heard a girl's voice in the woods." thirty times--twice on a line for 15 lines. daring. effective. chilling.

CLINICAL NOTE beings with a quote from the work of Dionne Brand. night. enclosure. a note. the author's last name, "Get a hold our yourself Ridley." the final line. "I am happy."

thru out the whole book, there is a sense of play with point of view, with the I, with the subconscious. if I knew more, I'd be writing about Jungian archetypes, power animals, water, stone & dreams.

a special note on the inner cover art, the gorgeous apothecary bottles painted by Holly Farrell.

a happy nod also to Ottawa's own Apt. 9 Press, who published Rest Cure as a chapbook earlier.

I haven't yet had the chance to get myself copies of the other Pedlar Press poetry titles published this year but I am looking forward to them.
Posted by Amanda Earl at 4:05 PM