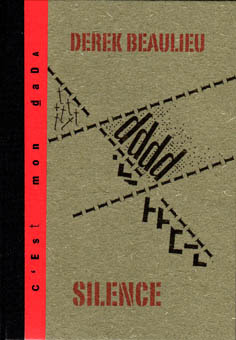 Calgary writer, concrete poet & publisher derek beaulieu came to Ottawa for a double header yesterday via the A B Series. here are a few sketchy, misrepresentative & incomplete notes for those who weren't there...

In the afternoon a small group of us (in the very cramped, dark upstairs gallery of the Daily Grind instead of the sunny, open & roomy café for some reason) were treated to excerpts from "How to Write" & "Scene of the Crime: Essays On Conceptual Writing." My favourite bit was his essay on Steven Zultanksi's Pad, "a litany of every single thing in and constituting his apartment, and whether or not his dick can lift it."

I also enjoyed his pieces on catalogues of imaginary & real bookstores & libraries, reminding me somewhat of Stephen Brockwell's Impossible Books poems.some of which were recently published in an above/ground press chapbook...

I picked up a gorgeous wee book of derek's from Redfox Press as part of the "C'Est mon Dada" collection called "Silence," [pictured above] a bunch of derek's Letraset concrete poems. & some free publications via derek's NO PRESS.

The evening event took place at Gallery 101, a venue with lots of space & rickety chairs & snacks. derek began with a stop motion animation of his installation at Pages Kensington, a book store in Calgary. this was a collaboration with him & a 15 year old animation prodigy, Emma Rouleau. You can see it here. Sadly when his massive "Prose of the Trans-Canada Highway" was projected on the Calgary Tower, it received no notice. This buys into what he said throughout the events, that no one cares about poetry…

He talked about the idea of poets using dead media, things like Letraset, mimeographs, typewriters, fax machines, that are no longer in use by the business community.

derek teaches creative writing to beginner university students who come to him all bright eyed & expectant to produce the next great work of poetry. He quells this hope early on in his lectures to these students with rudimentary statistics comparing the population of Canada, approximately 34 million, to the number of poetry books published in an average print run by a Canadian publisher: between 300 & 600 copies.

He repeated a few times that if someone had a message to get across, poetry would not be the way to do it because of this small print run, a number which is so tiny that it is seen as insignificant, merely the margin of error by statisticians.

He talked about the relationship between concrete poetry & graphic design/slogans. What if concrete poetry created slogans for impossible entities, such as the Tower of Babel?

When you played with Lego as a kid, did you stick to the prerequisite castle or did you use the pieces to create an object of your own choice? derek used this analogy to talk about what he was exploring & what others were exploring with concrete poetry.

[as a side note, i immediately flashed back to a No Press publication, Lego 50-15 which invited people to collaborate on a response to Lego's original American patent. it was very fun!]

As a kid, I had Lego, but I wasn't interested in building anything with the pieces. I divided my pieces up into families & invented stories about their various relationships.

derek said that poets are always building the castle, never trying to create something new or come up with their own rules, language. you can read more from his essay in Scene of the Crime.

Whether you agree with any of this or not, it is interesting to see where derek's coming from & what troubles him/drives him creatively. thru his own work & his publishing house, No Press, derek motivates further exploration & creativity.

For me, I have never cared about this concept of message in poetry. Poetry, to me, can communicate what is not necessarily possible to say easily or directly. Things such as grief, for example. I'm not interested or excited in any way about reaching an audience of 34 million people, or the kind of bland pablum that would have to be created to satisfy such a teeming mass; I'm interested though in reaching one person, who reads or sees something of mine & finds it rewarding in some way, to instill in them some kind of a way of seeing that leads to further thinking, further exploration on their part.

& derek does that with his polemic & often absolute seeming perspective on poetry. while it's easy to take some of these attitudes as another attempt at gospel, i prefer to see them as a ticket to exploration, to trying new things & to not be satisfied with existing patterns & ways of thinking.

& afterward libations & chats in the pub...

thanks to Max Middle of the A B Series for another excellent adventure…visit the site for upcoming events.
Posted by Amanda Earl at 7:04 AM

A small correction, Amanda. "Things That I have Put Into My Asshole" is by the late Daniel Cameron Jones, not D.G. Jones, from his recently reprinted book, 'The Brave Never Write Poetry'.