A VERSeFest Close Up: Chris Jennings 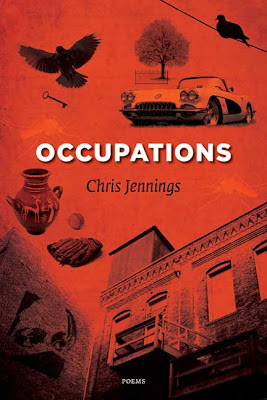 Among the many delights of V-Fest Day 2 was Chris Jennings' reading as part of the excellent In/Words event. He read a few new pieces & poems from his first poetry collection, "Occupations" (Nightwood Editions, 2012).

I am fascinated by poets whose poetic feet are firmly planted in contemporary soil, but who also dip their toes into the classics. This seems to be the case with Jennings, who plays with form, including rhyme & whose lines evoke the ancient bards of yesteryear while still managing to remain contemporary.

He talks about his own struggle with understanding the poetic lyric while studying poetry at the University of Calgary in his 12 or 20 questions interview with rob mclennan in April 2012:

"I didn’t start writing poetry with much purpose until after I'd already done a year as an undergrad at the University of Calgary. I'd taken the big survey courses in English lit. from beginning to present, and the whole first semester was poetry of one kind or another - Beowulf, Canterbury Tales, Faerie Queene, Shakespeare, the Metaphysicals, Milton, "The Rape of the Lock", the Romantics.... I was aiming for an English degree at that point only because I didn’t know what else to do and because I thought it would be relatively easy.  Then poetry, especially the lyric poetry, defeated me.  The longer works weren’t easy, so you could get into the narrative flow, but because they were longer, it was much harder to hold them all in your head when it came time to write an essay, and I have never been good at taking notes. I felt like I had to find my way with the lyric.

I fell into the trap of thinking that there were “hidden meanings” in the lyrics because I was told they were there and, hey, they must be hidden because I didn’t see them.  I now think of this as a consequence of poetry illiteracy; I didn’t know how to read a poem because I didn’t understand the importance of form, I had no education in formal rhetoric including figurative language, and I really didn’t even understand generally what makes for good writing either grammatically or stylistically.  And I found it much easier to work through these things by trying to write poems than by trying to understand other people’s poetry. There was a lot of banging my head against the wall and writing some really awful poems, and, over time, a lot of resisting the influences of people around me who were much more into non-traditional poetics.

Things really only gained some momentum when I was both trying to write poems and studying poetry with a really good professor, Alexandra West.  She didn’t teach poems as much as poetry literacy, and that was a huge help.  She also gave us Paul Fussell’s Poetic Metre/Poetic Form, which was my first exposure to writing about poetry that I both understood and from which I started to understand how to write about structure and content as part of a whole.  I’ve written poems and about poetry in lock-step ever since."

His perseverance has clearly paid off. It was a joy to hear his work last night. I found the poems he read to be full of panache & eloquence, strong images, thoughtfulness, word play, cadence, richly layered philosophies. I particularly enjoyed his playfully rhymed "Ebenezer Ivory" & the painterly pieces, such as this poem below, the 2nd in homage or reference to the W.B. Yeats poem, "Cuchulain's Fight with the Sea." I. in the book is a completely different poem with couplets & references to baseball; however, the sense of battle is there too. an interesting idea to tackle an influence in different ways. one i'll have to attempt myself.both poems deal with the man vs man; man vs nature; man vs his own nature conflicts.

To delve a bit more into the latter, II: the line breaks & language are powerful. The structure of the poem is well rendered: could we say that there are two sonnet like stanzas broken by a seven line stanza in the middle?  If it had been an eight line stanza or two quatrains, I suppose that would have been too obvious.

Each sonnet contains a turn in the final two lines. The repetition of turn. A circular structure that begins with the physical tide of waves, moves to a "tide of devils" in the 2nd stanza & ends with the figurative meaning of tide in the third, echoing Yeats' own repetition in the original. The 2nd stanza's language becoming more visual, more exotic, three-syllable words, such as "suppurating" causing an increase in tempo to evoke the feeling of the crest of the wave.

Soldier, there is a war between the mind
And sky, between thought and day and night.
-- Wallace Stevens, Notes Toward a Supreme Fiction

Milton stands by the sea in May of 1638, waiting
to sail for France six years before he would feel
his sight begin to fail. He watches waves break
across prows and continue their surge to shore.
It's windy, so the waves are high. A storm darkens
out over the channel, and its first serpentine
tendrils already scar the water with shadows.
White caps like wings spread across broad breakers
that hammer the rocks along the shore then turn
back against their source. Sometimes, turned sharply,
they crash back into the oncoming waves and foam
scatters into the air. Before the foam turns to water,
the wave that was moved by the law of the tide
and the wave turned back by the earth disappear.

Years earlier, in the Low Countries, Pieter Brueghel,
paints the grotesque of suppurating insects,
fish-headed imps and the assholes of lizards
that he calls The Fall of the Rebel Angels. Absurd
cloud-like figures float above a tide
of devils that pours from the sun,
swords like crosses more posed than poised.

Still earlier, in the Garden, Raphael,
describing the war in heaven, wrestles
with the limits of human imaginations
that have known only Paradise. He laments
"how shall I relate to human sense
the invisible exploits of warring spirits?"
and chooses violence without consequence.
Michael smites Satan, but his ethereal
substance soon closed, not long divisible,
and from the gash a stream of nectarous humour
flowed sanguine, such as celestial spirits
may bleed. At least, according to Milton,
blind by 1652, but sensible about the tide
of competing impulses within a single mind.

(Occupations, Harbour Publishing, Nightwood Editions, 2012)  [if there are any typos in this poem, they are mine, please inform me.-AE]

Jennings has also written reviews & critical essays about poetry, participating in the poetic conversation. Read an excerpt from his fabulous essay, "On the Sonnet" here, or better yet, pick up Arc Poetry Magazine Issue 65 for the full piece.

After hearing Chris Jennings, Al Moritz, Matt Jones, Jordan Chevalier & Luna Allison last night, I found myself composing lines of poetry. To me that is the ultimate compliment I can pay a poet, that their work inspires me to create my own. Thanks to VERSeFest for another fine evening of poetry. Tonight I am looking forward to hearing Catherine Owen, Stuart Ross & Don McKay. this festival for me is like an extended poetry workshop. i have learned from everyone who has graced the stage.
Posted by Amanda Earl at 9:14 AM