I was invited once more to take part in the ten book meme thingy, where you list ten books that have stayed with you. I found myself thinking about how much my writing has been influenced by Tom Walmsley since I first came into contact with him last November...all the books i list here are his & the reasons for this are considerable:

the man has worked in multiple genres & styles from poetry to fiction, to plays & film, even a libretto. I admire his versatility. It is something I aspire to in my own writing. His style ranges from the humorous, to the badass, to the spare to the quietly poignant to the violent, always with keen observations about human nature & the dark places we find ourselves in…

i didn't read What Happened until six years after its publication (it was on my shelf all that time!). after we began to talk in November, 2013, i remembered i had it. i was taken by surprise. it may be that i fell in love with Tom after reading this book. i guess it was a feeling of recognition, of meeting someone of like mind & heart...

an excerpt from "Little Honey":

i read all of these poems in one fell swoop & right after I wrote a long poem called "Trouble" in 48 hours & have been working on a life poem called "Paradise" that is an attempt to memorialize, i guess you could say, our love affair, beginning with our first meeting in February until today...

I am not currently writing fiction, but I will return to it & one of the things that Tom’s fiction has taught me is the power of the actual & the immediate. his description of going off into a dream state during a boxing match in Kid Stuff is fascinating & impossible to invent if you don’t know about boxing. I’ve always kind of dismissed my experiences as being not interesting enough…but maybe I’m wrong…

I love this man’s imagination & his willingness to write about the unspeakable, in such works as Shades & Honeymoon in Berlin. it is one of the things we have in common, a willingness to tackle subjects that breach the rules followed by polite society.

one of the images from Tom's writing that remains with me is that of a naked woman walking down a winter street & glowing red. It is from the opening chapter of Shades, entitled "The Passenger":

"Roxanne was standing on a street corner in the middle of the city at 4:30 in the morning and she wasn't wearing a stitch. Snow drifted against her and turned into trickles of water, then escaped as steam. Her body, trim and tense, glowed red from the lone neon sign behind her. She did a quick scan on all sides: not a creature was stirring. She couldn't remember the last time it had snowed on Christmas morning."

i learned a lot about dialogue and timing by reading Tom's plays. they are darkly comedic & fascinating. i wish i could see them performed...

after reading several of his plays, I embarked on an ambitious undertaking to write my own play, "Heaven," which remains a tangled mess of rewrites…stay tuned…there is something amazing about the thought that something I write could be translated into theatre. it’s like going 3D. it opens up myriad possibilities.

since we are two writers on the same wavelength, i don't think it's any surprise that we’ve taken to writing some things together, including a very smutty piece of erotica that may one day be shared with the world, a series of haiku entitled "Dirty Love" & a rather playful long poem,"the Feast." you can read some of these works-in-progress, if you dare, on the sweet fan site, Tom created in my name, which is not just a fan site, but a celebration of this unexpected love & camaraderie that has developed between us. 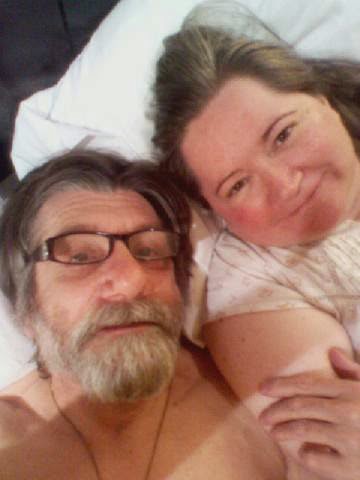 here in no particular order are all of the books & plays I’ve read, & films i've seen that have been adapted from his writing  & been enthralled by of Mr. Walmsley, who I have the pleasure & honour of calling
my love:

Blood, film based on his play

note that there are still numerous plays i haven't yet read but i will...

from so many points of view I’m thrilled that Tom has come into my life, but from the point of view of this blog, of things literary, he has galvanized me, is a creative force & my muse...I am awed by his skill as a writer, his versatility,  his brilliance, his appetite for the dark & the forbidden, the duende in his work. may all of it rub off on me. as I’m rubbing against him…but that’s another story…
Posted by Amanda Earl at 3:30 AM