Thanks to the combination of my near-death experience and the ups and downs of my hormones from perimenoupause, I have become a hothead. I can react quickly and harshly concerning issues that are dear to my heart.

Recently on FaceBook, I wrote a belittling post in response to a Tumblr post that was being shared around by several friends. I called out those for sharing the piece for considering it worthy of a post and publicly shamed them, referring to their actions as stupid and daft (the latter thanks to my Yorkshire heritage). This is not acceptable.

About six months ago I wrote a Tumblr post about the importance of good Internet citizenship. My behaviour on Facebook has gone against the guidelines I set for myself, which appalls me.

In the past year, I have found that my interactions on FB have become increasingly heated. I become frustrated, particularly when it comes to articles and posts that seem to advocate censorship and the restriction of artistic freedom, including advocacy in favour of guarding language and suppression of expression. When I see articles shared on FB multiple times, it gives me the impression of what I like to term “bandwagonism,” the acceptance of something by a lot of people, often out of a need to have the approval of one’s peers. Such bandwagonism leads me to feel isolated and alienated.

It is in everyone’s best interests, including my own, that I limit my FB activity to the administration of fan pages. For some reason, I am quick to write a scathing post on FaceBook. Don’t get me wrong, I still consider many of the points I’ve made there to be important and relevant, but not the way I make them, which can be to insult others for their opinions, and wanting to shut down discourse that disagrees with my own opinions.

I am a flawed individual in many ways. I am sure I’ve alienated numerous people. I don’t want nor do I expect to be a popular person, nor will I ever temper my beliefs for the sake of approval of others, but I want to express myself in ways that are not hurtful.
In this case, a few people were good enough to call me on my actions. I appreciate that. I’ve written apologies to the parties that were offended by my insults.

I’m not an easy ride alas. It often takes me a few days or more to see reason. But when I eventually do, I usually apologize. 2016 has started in a blaze of scandal. Let’s hope the cold weather cools me down. If not, feel free to kick my ass.
Posted by Amanda Earl at 8:24 AM 2 comments: 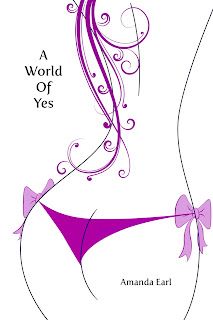 Erotica author and editor extraordinaire, Lisabet Sarai, kindly features me on her blog today. I talk about 21st century literary reboots I'd like to read and my new novel, A World of Yes. There's a short sample included and the chance to win a free pdf copy if you comment on the post.
Posted by Amanda Earl at 5:06 AM No comments:

Critical Thinking Vs Manipulation or Art Vs. Pabulum 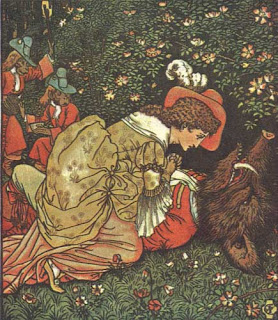 Consider this scenario. A university professor teaching a first-year course decides to give the students a lesson in critical thinking. As an example, the professor uses a popular film from the students' childhoods.

The film is Disney’s “Beauty and the Beast.” The professor establishes that the film is liked by the students. They discuss their memories of the film. The prof then screens the film for the students once again.  The students are then given a pamphlet on domestic abuse. The instructor goes on to reframe the film as an abuse-apologist narrative.

I have several problems with this pedagogical method. Let’s give the professor the benefit of the doubt and assume that they also plan to discuss other modes of interpretation in the class. That’s a possibility. But this is not an example of how to think critically. It is an example of an agenda-based interpretation. It is effective and it is manipulative. Why is it manipulative? The professor has pre-established an interpretation and only one interpretation by handing out leaflets regarding domestic abuse. The class itself has taken the subject of abuse as one of its primary focal points.

If one wishes to encourage students to think critically, a better method would be to provide the students with various interpretations, Marxist, Jungian, Feminist, etc. Is this reasonable in a first-year class? In my opinion it is. In my experience with first year classes, granted this goes back to the 80s, we were exposed to a wide variety of philosophies and we weren’t told ahead of time which one we should agree with.

Next I have a problem with the choice of the Disney film, “Beauty and the Beast.” The film changes the original fairy tale drastically. Instead of the original courtly Beast in “La Belle et la Bête”  by Gabrielle-Suzanne Barbot de Villeneuve in 1740, this Beast is wild and dangerous. The primary point of the tale, to reduce it to one single piece of moral instruction, is to not take things at face value, to not make superficial judgements about people, to find the good. The story is about Beauty’s journey and is not the tale of the Beast, who is ancillary to the story, not its focal point. Variations of fairy tales are par for the course. That is one of the wonderful things about them. There have been lots of versions of this tale, one of my favourite being “The Courtship of Mr. Lyon” by Angela Carter in her Bloody Chamber collection or Marie-Claire Blais’ “La belle bête.”

It is understandable that the professor chose to expose the students to a version of the tale that they would be familiar with, and perhaps later on they went on to study more variation.

My final problem with the framing of the narrative according to one particular agenda is how this kind of narrow thinking hampers creators of art.  If students learn that it is acceptable to view a piece of art, literature, theatre, opera, etc with such a narrow window, to interpret something literally, we have seen what happens. The work is banned. Censorship occurs. Is this a wild leap? No, it isn’t. Take a look at books that have been banned in schools, in libraries etc and the reasons for their being banned. Books are currently being banned for being anti-family, for homosexual content, for including subjects such as date rape and masturbation.

The French philosopher Voltaire fought against censorship in his time.
“As you have it in your power, sir, to do some service to letters, I implore you not to clip the wings of our writers so closely, nor to turn into barn-door fowls those who, allowed a start, might become eagles; reasonable liberty permits the mind to soar — slavery makes it creep.” 1733 letter to a high-ranking government commissioner.

The professor, by enforcing one interpretation of a film and by predicating it with the kinds of conclusions they wanted the students to reach, is teaching students to focus myopically on a creative work, a work that wasn’t made to be interpreted in only one way.  Where can this lead if not to censorship? Censors throughout history look at art from one specific point of view in order to uncover obscenity or information that runs contrary to the State. Who decides what is contrary, what is against the State’s values or what is in the best interests of society? I say that the individual decides, not a censor, not the government, and not a professor.

If the professor's point in the lesson was to demonstrate how insidious rape is in our culture, so much so that is often weaved in to a narrative without a reader or viewer's conscious awareness, manipulation isn't the best way to make that point. The only point the professor makes is how susceptible the students are to manipulation. Now they will likely look at every film and every piece of writing through a single perspective. This is reductive and doesn't lead to an intelligent or critical exploration, but only to dogma.

I will continue to fight against dogmatic thinking and I urge others who feel similarly to join me.  If this was the only example of the literalization of art and its repercussions on artistic freedom, I wouldn’t bother writing about it.

Please consider liking my FB fan page for articles on this subject, news on my writing and publishing activities. Or visit my site. I wish you a happy and productive 2016.